A look at internal hemorrhoids pictures.

A picture of internal hemorrhoids is very difficult to get hold of as it can only be done inside the anus canal with the help of a endoscope.

This type of picture usually is done by a practitioner. So I must thank the guys that donated these pictures to me.

This Diagram shows how the hemorrhoids have formed themselves inside the anus canal. 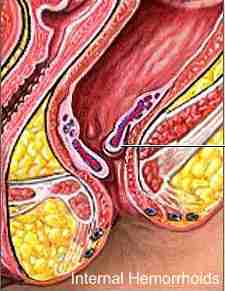 This next picture shows an actual 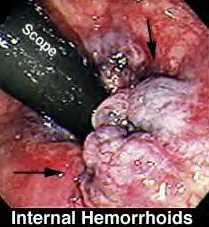 The next picture is again of another real

and again with the aid of an endoscope 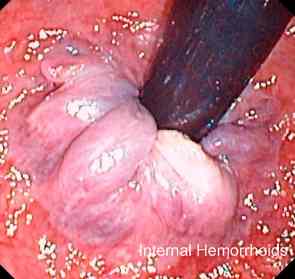 The above two pictures of internal hemorrhoids suggest that the first picture is of a more deteriorated interior hemorrhoid than the second picture. However it could be the photo itself or the lighting giving the wrong impression.

Looking at these above two pictures, you can see how the vein walls have weakened at a certain point, and subsequently collapsed at that same point. Consequently the hemorrhoids have formed.

In this case above, the only difference is that it is all internal, in other words right up inside the rectal canal.

The only good thing if one wants to say about these internal hemorrhoids is that due to the fact that they are not exposed to air, they are pain free.

However, they must still be treated as soon as possible, because they will deteriorate faster than you think and then come out of the anus and that is when the pain will start.

This is one of the biggest mistakes people do with internal hemorrhoids, because they feel no pain, they do nothing about their hemorrhoids.