The question is does rubber band ligation actually work?

I can give you a true personal response to this question because this was the surgery choice that my surgeon and myself chose for me at the time.

This was a relatively new procedure at the time I had it done. It obviously is not so new now, as its been around for several years. The procedure however has not changed in any way.

It probably is the most popular choice amongst Doctors and Surgeons, and they will try to convince you of the fact.

It is usually best used for internal hemorrhoids, and possibly for the smaller size hemorrhoids.

The best part of this procedure is that it can be done in the surgeon's rooms under local anesthetic if needed. Therefore avoiding all risks associated with anesthesia.

The cost is also cheaper as the procedure is usually all done in an hour. So you don't have any hospitalization costs. These costs usually mount up very quickly, and hugely.

The other most important avoidance is you cannot fall victim of incontinence in any way, shape or form. 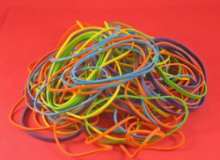 The surgeon uses an apparatus
called a banding instrument,
together with a proctoscope.

In a lot of cases you
the patient holds the proctoscope
in position for the surgeon.

Usually 24 to 48 hours after the procedure the hemorrhoids will fall off by themselves.

The inconvenience is that you will feel a very strong desire to go to the toilet. You will eventually finish up on the toilet, because the urge is way too strong to resist.

You will PUSH and cause disasters.

You will also suffer from a very strong burning sensations and an irresistible pain.

I have had this rubber band ligation done to me twice. On both occasions I only managed to suffer Pain, frustration, cost me a lot of money and the hemorrhoids returned a month later.