What's involved by hemorrhoids surgical treatment, and what are the consequences that follow.

This is where the surgeon surgically removes your hemorrhoids. This procedure is usually used with complexed cases, especially where other surgical procedures have failed. It is also very commonly used with external thrombosed hemorrhoids.

This is where a blood clot has formed. The blood clot is stubborn and will not move along the veins.

This procedure is also used in other more difficult cases, where the hemorrhoid is large in size and nothing else works, or where other surgery methods have been used and the hemorrhoid has returned. 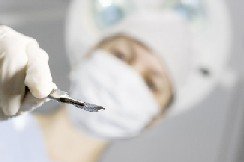 This surgical method is usually known as hemorrhoidectomy.


This usually requires hospitalization but fortunately, in most cases only for the day of the procedure.

The surgeon will cut open the hemorrhoid and remove the blood clot. Clean up the area and a few stitches that dissolve by themselves will finish it up. Sometimes the surgeon leaves an open wound, and no stitches are used.

Your possible risk involved here is with the anesthesia, unless in some circumstances a local anesthetic is used.

Your costs will be very high as you have a hospital bill to pay on top of your surgeon bill. The Pain will be excruciating as you have a new wound, that will be throbbing with pain.

Your surgeon will in all probabilities suggest a Sitz bath, to help heal your new wound. A sitz bath is one of the treatments highly recommended for all hemorrhoid problems.

The other risk involved is the surgeon could accidentally touch the wrong nerves, and in doing so you could remain permanently incontinent.This however would be difficult to happen with thrombosed cases, but can happen more easily with the removal of large hemorrhoids, where the tissues around the hemorrhoid are also removed using this surgical method.(hemorrhoidectomy)

Another risk is that if the surgeons cut, has not been done properly and completely removed the thrombosed hemorrhoid. The hemorrhoid will fill up with blood again, and your clot will return.

There is also a risk that you can have the inability to urinate.

There could be bleeding from the wound for about two weeks after surgery and could possibly get infected, so more complications.


Last of all. If after having gone through this hemorrhoids surgical treatment. All the risks and pain involved, and you are not taught how to avoid hemorrhoids from returning. You will have gone through all this agony for nothing, because a new hemorrhoid will re-appear.

This situation is very common